Note: Listed are just some examples. If you have any questions not listed here, please contact us using the form on the contact page. 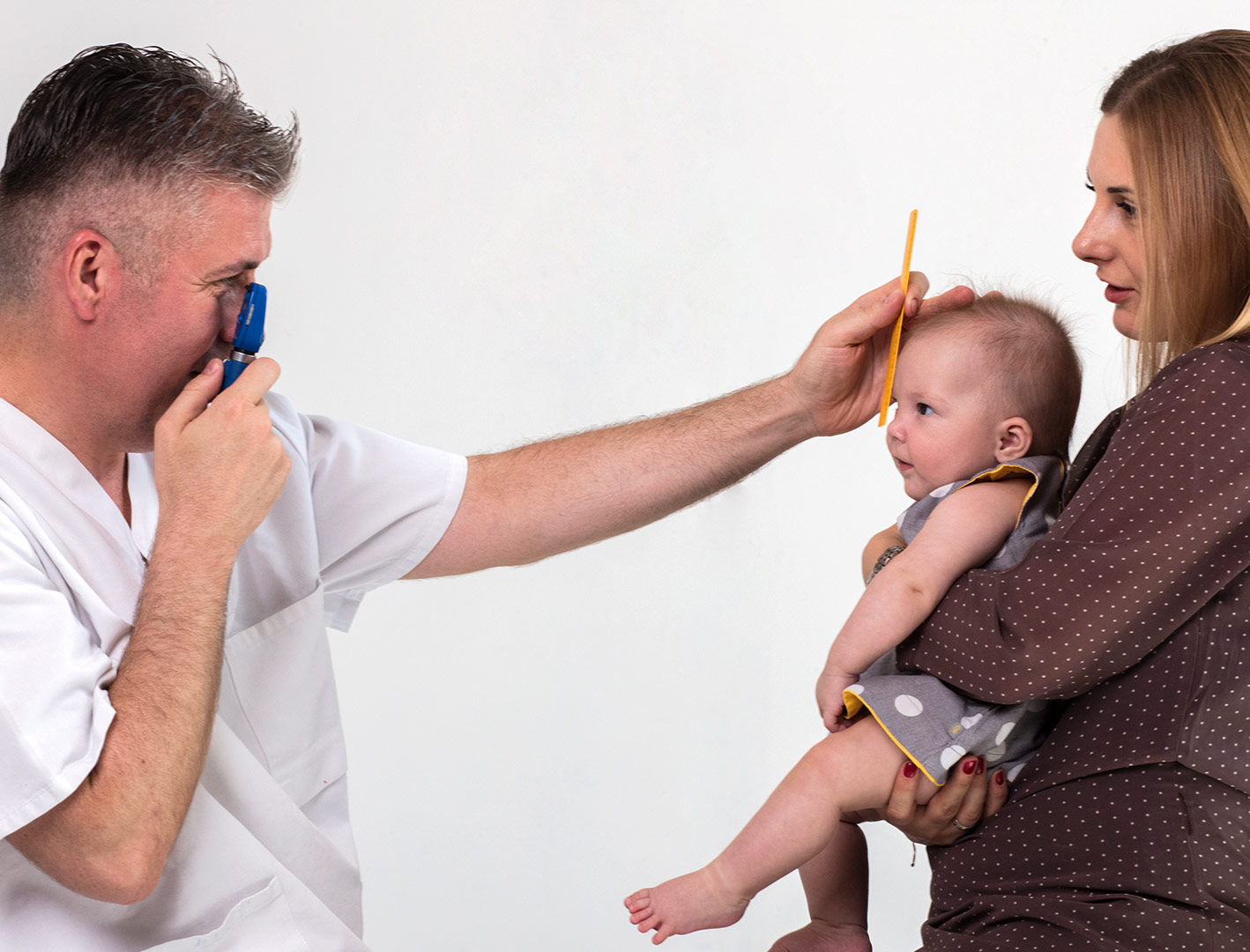 My child is 15 months old. She has a drooping left upper eyelid since birth. When awake, the margin of the lid is at the center of the pupil of the eye. Does she need an operation?

The drooping upper lid, as described, covers the upper part of the visual field and possibly the central visual axis. In this case, the normal development of vision is compromised and the position of the lid needs to be corrected. At this age, it is not possible to properly assess the function of the levator muscle. Because of this, the most appropriate and least traumatic surgical method is frontalis suspension with a silicone sling.

I am 55 years old. For about one year I have been bothered with excess skin in my upper eyelids, as well as a feeling of heaviness in the brows, followed by frequent headaches.

The skin of the upper lids is the thinnest on the body. Because of the specific function of the upper lids, responsible for spreading a layer of the tear film over the surface of the eye with blinking, the skin stretches with time. This can cause cosmetic as well as functional problems. This so-called, involutional process can be accompanied by upper lid and/or brow ptosis. In an attempt to overcome this, the frontal (forehead) muscle exerts itself, leading to a feeling of heaviness and headache. Surgical correction of these problems can be done at the same time through one incision in the skin of the upper lid, in local anesthesia.

Our son underwent „probing“ of the right tear canal at 13 months of age. The operation was performed under restraint (without anesthesia). The symptoms stayed the same after surgery. Now, at 2 years of age, he still has tearing and mattering of the right eye. Does he need a bigger operation?

In this situation, it is necessary to perform an irrigation of the tear duct, in general anesthesia, with simultaneous endoscopy of the nose. If the tear duct is patent, a silicone stent is inserted, to be left in the tear duct for 3-6 months. If the tear duct is not patent, this means that there is probably a bony obstruction or scar tissue in the canal, which indicates the necessity for a DCR operation.

My right eye has been watery for 5 years now. However, 6 months ago the right tear sac had become inflamed, so I had to receive antibiotic injections for 10 days, after which they had to make a skin incision over the sac to let the puss out. The infection repeated one month ago. How often will this happen and what can I do to prevent this?

An acute inflammation of the tear sac is caused by the retention of debris and bacteria in the tear sac, because of the blocked tear duct. Antibiotics and drainage of the puss from the tear sac are only a temporary solution, because, after the healing process has finished, the infection may repeat at any time. The solution is to establish the normal flow of tears, which will flush the debris and bacteria into the nose. This can only be achieved by surgery, which should be delayed at least one moth after the infection.

I have been wearing an artificial eye since the age of 15, when the eye had to be removed after an injury. Now, at the age of 45, the prosthesis has a tendency to slip over the lower lid, which seems to have stretched during the years. Can this problem be solved with a new prosthesis, or do I need an operation?

An ocular prosthesis or „artificial eye“ is in effect a foreign body, which, over the years, may induce certain negative effects on the structure of the soft tissues in the orbit. This can be aggravated by a poorly performed primary operation of eye removal. In cases such as this, after a clinical exam, there is usually a need for additional diagnostic procedures, such as CT (computerized tomography), which gives us information on the condition of the soft and bony tissues. At a certain point, correction of the ocular prosthesis cannot help anymore and surgery is the only option. The aim of the surgery is to supplement the deficient soft tissue volume of the orbit, to deepen the lower fornix (the space behind the lower lid which holds the prosthesis, and to tighten the lower lid which bears the weight of the prosthesis.

Due to heart problems, as prevention, I use Aspirin tablets 100mg/day. I have been told that I should discontinue this drug prior to eyelid surgery?

Aspirin is a drug which, appart for treatment of pain, is used to reduce the ability of the blood to clott, in patients with cardio-vascular problems. Prior to surgery on the eyelids, tear ducts or the orbit, this drug needs to be discontinued for a period of 14 days, with permission from your physician. This is the amount of time, needed for the the clotting cells – the platelets, to regain their normal level of activity in the coagulation mechanism. If this is not done, uncontrollable bleeding may occur during or after surgery. Besides Aspirin, there are other, so called antiaggregation or anticoagulant, drugs which should be reported to the surgeon prior to scheduling an operation, in order to prepare the patient accordingly.